I could not miss the 16th edition of the Xtreme Verbier.
I prepared my camper and I went to Verbier for the third time. For a trip of only 880 km!
The Xtreme is the most anticipated event of the freeride where will be crowned world champions in both freeride ski and snowboard.
The Swiss weather forecast predicted bad weather for which the race was moved to 20/3
We had two days for skiing and for the first time we have found great powder in Verbier resort, a great gift of Heaven in this period!
As had been predicted by the Swiss forecast, the weather was perfect!
The snow was soft and a lot more than the first day in Verbier
There were all the conditions for an event to remember!
Let’s go back a little back in time. 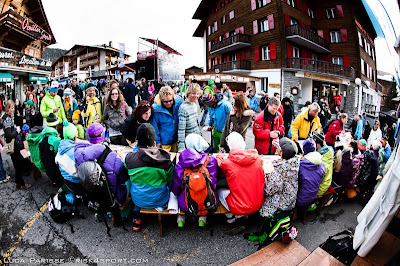 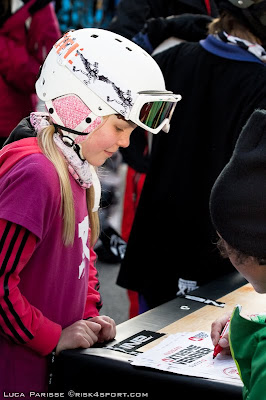 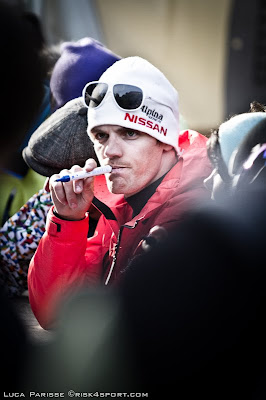 18/3/2011
Today there is already a big party on the streets of Verbier, music and entertainment along the
road through the village to the start of the cableway of Medran
At 5e30pm, finally, the “open Ceremony” begins, the best raiders in the world go up on stage to take the race number.
The ceremony is over, I shot the photo with all 37 athletes, skiing and snowboarding, men and women. 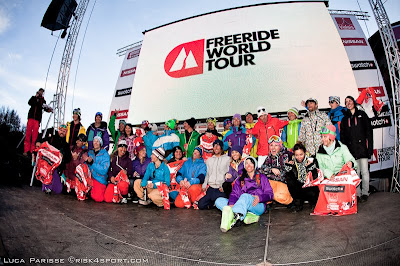 19/3/2011
Today is expected to “Dakine Freeride Junior” but because of poor visibility has been canceled and postponed to the next day, after the big race.
Let’s go skiing, snowing a lot, we ski on the slopes of Nendaz where visibility is better. 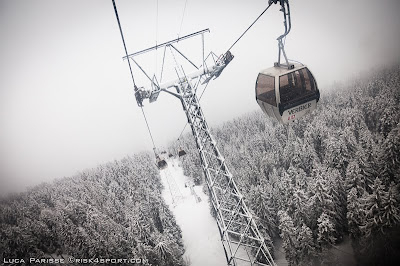 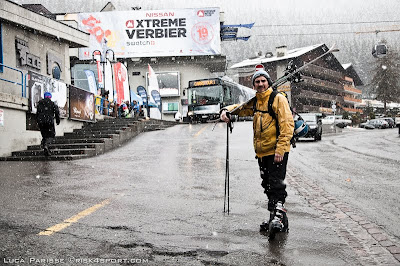 20/3/2011
Finally the race day has arrived!
Wake up at 6:30. We walked across the center of Verbier and get to Medran. It ‘s a great climb with a backpack weighing about 10kg.
In the bag I had: 2 cameras (EOS 5D MKII and EOS 7D), Canon 300 f/2.8L IS, 2 Extender (EF 1.4x and EF 2x), Canon 24-105L, Canon 15mm fisheye lens, filters, batteries etc..
My assistant Kappa and I arrive early in the Col Des Gentiane where was the area set up for the event: great reception for media and guests: tables with benches covered with soft fur throws and blankets not know which animal, chairs and soft puff placed on the snow, a big tent with a buffet, a stage for the ceremony, stand and lots of music! 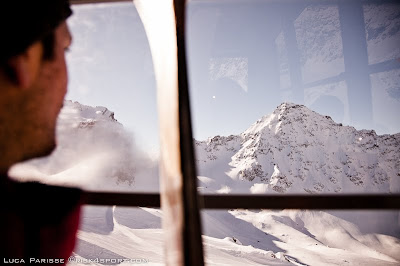 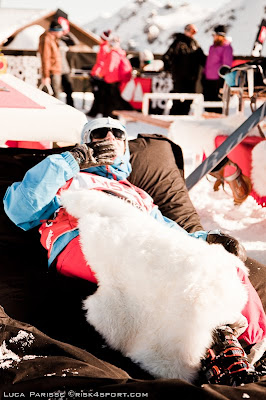 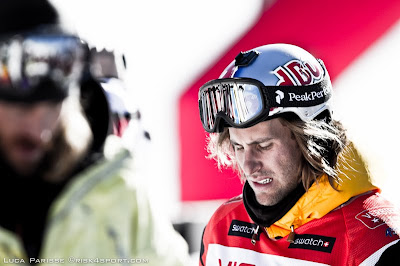 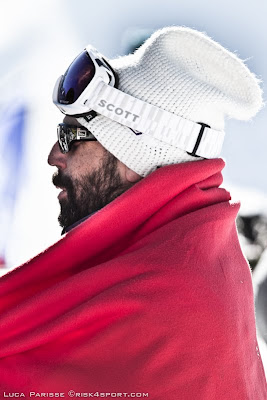 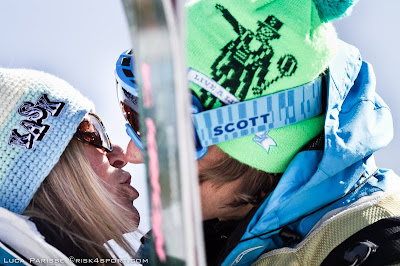 Where to stand to get a good view over the race mountain?
The media area was actually too far even for my 600mm lens!
I go down, My position now seems ok………… 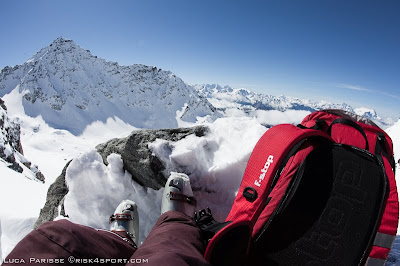 The women competition starts: Janette Hargin (SWE) down the slope skiing
fast and aggressive, jumping from a rock about ten meters, for her victory is assured.
In the field of snowboarding is Anne-Flore Marxer to win. 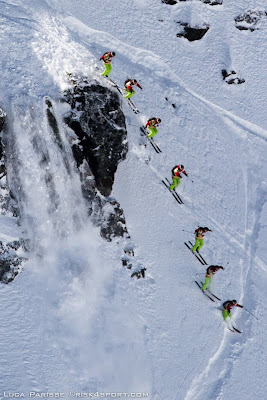 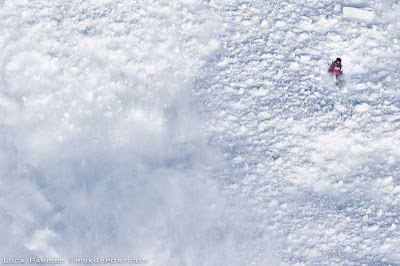 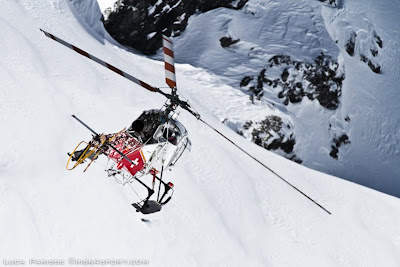 Now is the time for men.
Their departure is about 300 meters higher than the women, men start from the top of the mountain where the slope is around the 50/54 degrees! 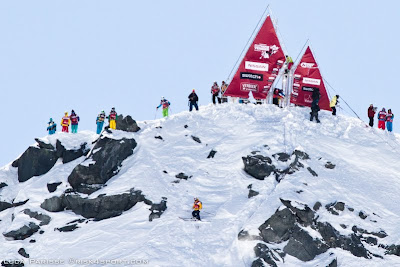 The race is exciting, the raiders come down too fast, on the top the snow does not even seem the best, i think that a lot of wind there was in the night.
Do not miss accidents and small avalanches, but fortunately nothing serious.
When the race is almost over I see, through my telephoto lens, a man dressed in red and white down rather fast speed, comes like a lightning bolt on top of a huge rock cliff 20 meters and then he immediately tackles another. He is Aurelien Ducroz, once again the winner of the Xtreme Verbier Freeride World Champion 2011. Masterful, as usual, also the run by Xavier de Le Rue, who was also repeatedly leading the Xtreme. 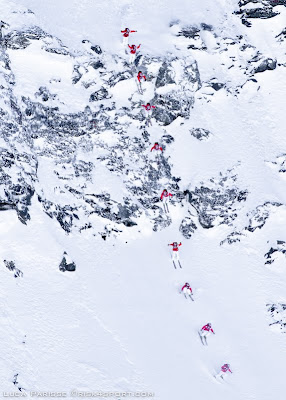 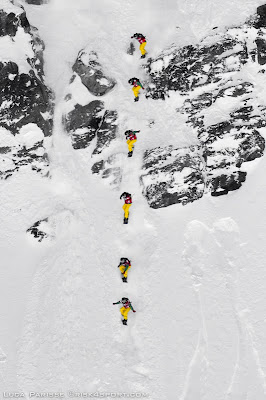 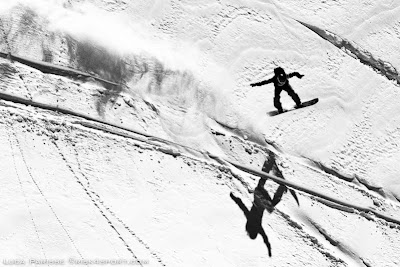 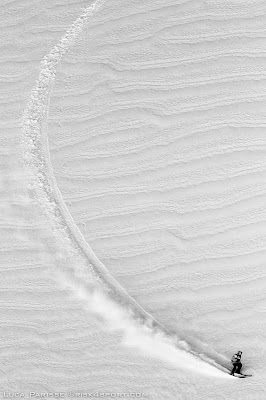 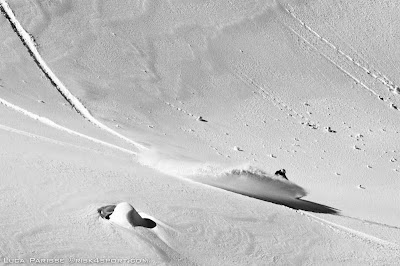 I walk back to the Col des Gentianes. I’m entering in the large white tent where I refreshed with great food and look forward to the awarding of the most courageous athletes on the planet. 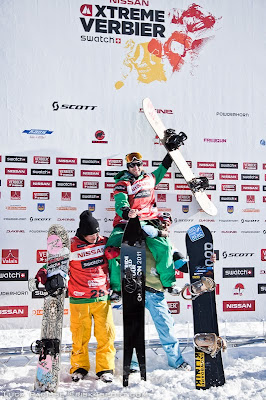 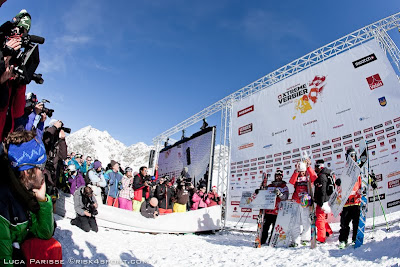 It ‘s over the party, go back down over 2000m, leaving the winter and entering in the hot spring town of Verbier.
I always expect those 900 km to get home in L’Aquila.
I’m glad to have lived once again the party of the Xtreme Verbier, but also for having skied on the soft snow that fell in these days …. Is this not enough??